Meet Jamie, one of our Green Guardians

So, Jamie, tell me a little about yourself?

Well, I'm an actor in my late forties. I grew up in Malaysia but have been in London since I came to drama school in the mid-nineties.

What brought you to Thamesmead?

I had been living in guardianship properties for several years. Through Bow Arts, I found this flat, which is a long term guardianship. I’ve been here for about two and a half years. This is the first time that I've lived in a place for more than six months, and It’s been nice to put down roots.

What was your impression of Thamesmead before you came?

In my second year at drama school, I did a stage version of a Clockwork Orange, so I was familiar with the landscape. My impression back then was that Thamesmead was fairly bleak. The first time I came to see a flat was in February, it was cold, and it was grey, and I thought nothing was inspiring about the area. Then another flat came up in the spring, it was a sunny day, and it was brilliant. The green was coming out, and I thought it was just amazing. It's such a beautiful place with the brutalist buildings and the amount of lush greenery.

You received one of the CLEVER Cities Making Space for Nature growing kits – how did you find out about it?

I believe it went out to the Cultural Forum group and then Facebook gave me a prompt. I thought that sounds interesting. I've never planted anything before, but my parents have a lovely garden at home. They're always trying to teach me the names of flowers, and I'm always taking the mick out of my mum with fake, made-up names! I'm slowly learning. I do now have nasturtiums.

Why did you apply for a kit?

It was probably lockdown that made me apply. There was nothing in the flat that was growing. I had tried peace lilies and parsley but nothing ever survived! I felt that this would be an amazing opportunity to get involved in the neighbourhood more and meet other people, as I saw there was a Facebook Green Guardian group set up for people to share their experiences.

What did you think of the kit when it arrived?

Oh, I loved it. It was presented really well, simple to understand, and the graphics were great.

It was exciting. I love unboxing things, so I made a little film for Facebook to show how fun it was getting to work out what was what. Then I thought, oh, I better get a move on because the growing season was getting on.

How have you found growing?

Good. I've enjoyed making the balcony into a place to grow things. Most of it is growing well, and I was surprised how easy it was. Seeing the first shoots of green in tubs was amazing. And I just thought, wow, that's cool! I’m hoping to harvest my broad beans soon, that would be amazing.

What would be your top tip or tips to other budding gardeners?

Don't plant out too early! Also, it’s quite windy up here, so it’s good to find suitable sheltered spots.

What has been the best bit about using the kits?

I think it’s given me a sense of time and permanence, but also pride. What I mean by time is, you don't plant, for now, you plant for a few months’ time. You’re building into your future. You put all this hard work in knowing you won't see anything for weeks, if at all.

I think growing has kept me a little bit sane in lockdown. It’s been too easy to get caught up in keeping up with what’s happening all the time. So, having these plants, doing their slow thing has been a metaphor to sit back and let things happen at their own pace. Even if you can't see it, it's still happening. I suppose it’s been a self-growing process. 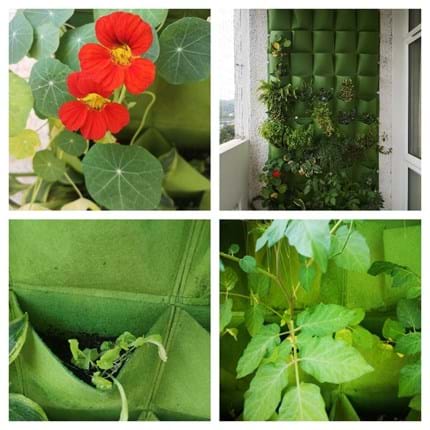