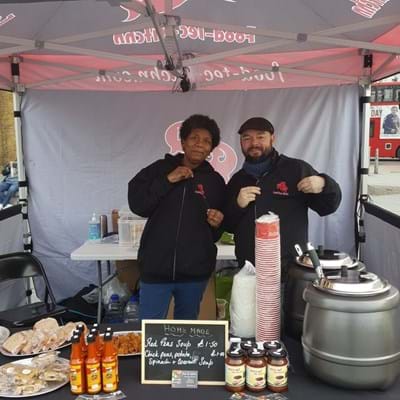 Anne Torrens is living proof that age is no barrier to starting a business.

At the tender age of 58 years young, being a trained Chef and a qualified Teacher and moreover right now the proud owner of Food-Tech-Kitchn she proves that following your dreams can lead to happiness and achievement.

Anne had worked for many years in the catering industry within positions ranging from ‘Meals-on-Wheels,’ to catering for functions and then to serving healthy meals in numerous schools in the Royal Borough of Greenwich. Hoping to achieve more in her career, in 1994 Anne went to University and completed her degree in Home Economics following which, she became a teacher in local schools for nearly a decade. Although she loved teaching she unfortunately suffered from some debilitating health issues which meant that she had to leave the industry and permanent work at that time, taking early retirement. With those issues now a thing of the past and wanting to be “needed and productive again,” Anne has decided that she is ideally situated to springboard into a business venture that strengthens her future and satisfies her wish for rewarding years to come.

What would be better than to concentrate a new business on that which you know best?

Nothing would be better and so with Anne’s love of food combined with a healthy eating mantra, she was prompted to start making specialist food sauces and healthy meals for friends and family. The response they gave her was terrific!

Initially she had considered the viability of starting her own business and although the business was slow in taking shape, she saw an advert for a business start-up course being organised by Peabody in Thamesmead and immediately signed up. Anne fully believes she can now launch her products at greater market depth (and with a little help from Peabody) as a fully functioning business enterprise. With a heightened sense of motivation following her “critical acclaim” from her initial market subjects, the time appears right now to do so.

She told us “Although I had food experience and success in the past, I wanted to develop my business, set up a website and learn how to market and brand my products which is where I first of all wanted help upon.”

Anne attended the 2-week course in Thamesmead, developed her own website, and structured a branded company, selling her sauces in 5 local shops, additionally to markets in Greenwich and regularly taking orders online and over the phone for a variety of functions.

She was recently endorsed by Good Food Greenwich and awarded a 4-star rating by the Greenwich Environmental Health team.

Asked how Peabody have helped Anne, she said: “Having somewhere I can go to help me develop my ideas and see them evolve into the end product which I am now selling was the support I needed. I didn’t want to go back into teaching and this has helped me do what I love. “

Anne is now focused on growing and developing her company with the long term aim of building a business which can employ local young people and supporting them in achieving their goals and a career in the food industry. Without question, this budding entrepreneur deserves our support.